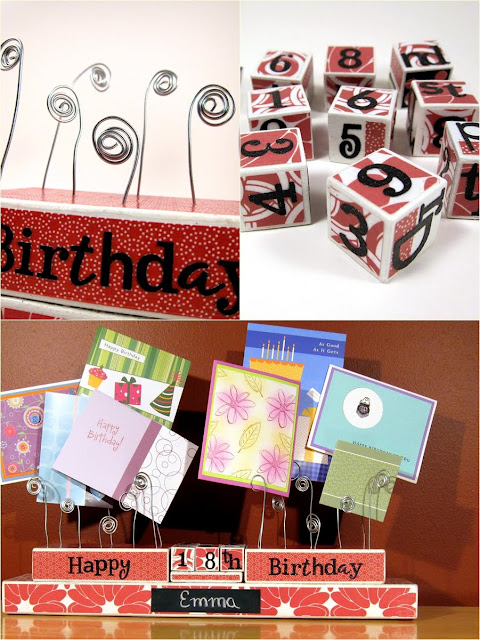 How do you display your birthday cards? I find this a challenge.
We do not have a fireplace in our little home. In fact, horizontal display space is at a premium around here.
On top of that fact, I find lots of random cards on a shelf looks a little messy.
So, I was thrilled to read about the 2×4 birthday board by How Does She.
It is fun and would keep all the cards together in a great display.
I made my version with a few changes. I wanted to have the birthday numbers premade (blocks worked for that job) and I also wanted to incorporate the person of the moment’s name (in walks the chalkboard plaque).
As with most projects, this took longer than expected. I love the ending result, but jump to the end of this post to find out what I would have done differently. There were a couple of road blocks (pun intended) and steps that I probably would do-over.
I started with a 2×4 that I had cut down while I was at Lowes. One length was 18 inches. The other two were 6 inches. I also grabbed some 1 inch blocks at a craft store. When I got home, I realized that the blocks were too short. So, I cut a 3×3 square of leftover plywood – which raised them up to a perfect height.
After a little sanding – I primed and sprayed all the pieces white. I focused on the edges, since I knew that was the only surface that would show after I covered them with paper. (this actually was my first misstep in this project)

I picked out some matching red paper and patterns.
I use red in a number of our rooms, so I thought they would coordinate with our decor.
Then the tedious part started.
I did not want rough edges of paper (like the link above). I wanted crisp edges on the panels of paper.
So, using my paper cutter, I cut out lots of squares and rectangles!
I left about a 1/8 in margin of white showing on each side. And then I started to Mod Podge them all to the blocks. I haven’t worked with Mod Podge in awhile (I made the Fourth of July box after this project). I forgot how messy it can be. I really needed to take my time, smooth the paper out and watch it after adhereing. Little bubbles started to pop up sometimes randomly.
Note: Before I adhered the paper to the top of the 6″ blocks, I predrilled holes. I placed 8 holes for the wire stands and one in the center to connect it to the bottom block. I adhered the 3″x3″ square with wood glue and hot glue. 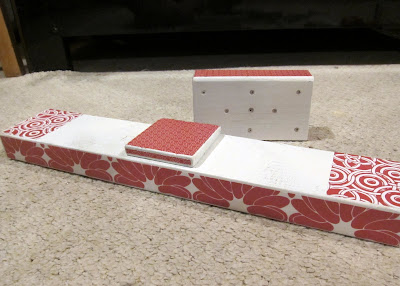 Then, I used more wood glue and connected the 6″ block with one center screw. 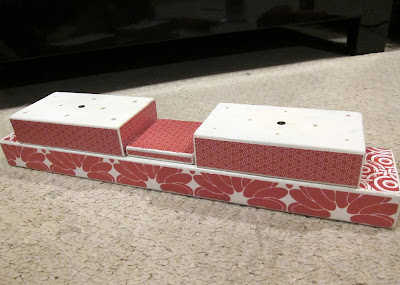 After I connected them, I Mod Podge’d the paper on top.
But how did I find the holes, you ask? Good question!
I made a vellum template/jig that helped me poke the wires precisely into the block! 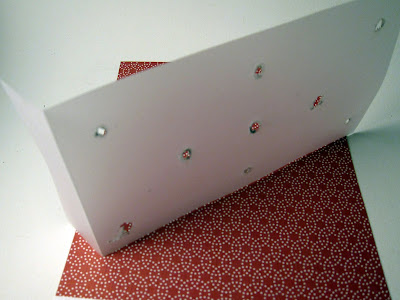 After all the paper cutting and Mod Podge madness, the process was fun again.
I do not have a fancy font paper cutting machine (though I secretly want one!). So, I found some alphabet stickers at the craft store. I do regret the fact that they had glitter on them (you will see why in a minute).
I carefully laid out and adhered the letters to the board and blocks. On the 9 blocks, I made sure to have 2 sets of numbers (two “3s”, two “8s” etc). I created at least one (or two) “th”, “st”, “rd”, and “nd”.  With six sides on each block – there was  plenty of room.
I also made some fun ‘blank’ black blocks. (say that three times fast!)
I do advise putting the letters on separate blocks from the numbers.
See the center block below?
That poor little “3” will never be able to sit next to the “rd” since they are on the same block (good thing I made doubles). 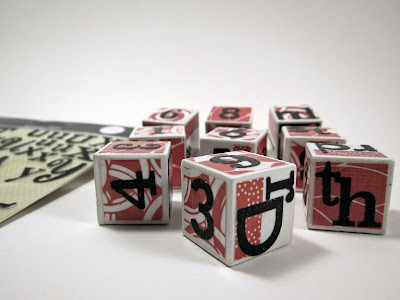 After lettering everything, I covered with another coat of Mod Podge. This was my second mistake. The sparkles on the letters started to smear all over. Yuk.
But I gave everything a clear coat of acrylic to seal it up. It think I’m the only one that notices the  runaway black sparkles.
My third oops was the chalkboard plaque. I could not find a little wood plaque at the craft store that was the right size. So I came home and scavenged.
I initially cut up the plastic cover of a cheap-o photo album. 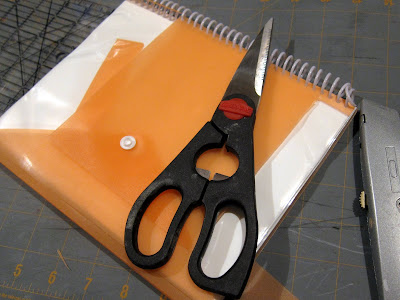 And I thought it was going to work. The chalkboard spray paint did adhere (leftover from my DIY chalkboard). And I could write on it. I glued it to the blocks. (in fact some of the pictures here are with that plastic plaque)
But then it fell off the block and it started to chip and peel.    and peel.     and peel. 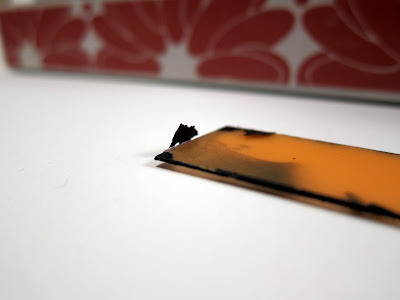 So, my fix for this was a piece of balsa wood. I cut it to that size, spray painted it and glued it to the blocks with my glue gun. It worked fine as a substitute.
Finally, it was time to make the wire holders. Using 18 gauge wire (from Lowes) and some jewelry pliers, I twisted the wire around several times. I made varying heights. The predrilled holes almost went through the block, so they were pretty sturdy and did not need to be glued down. 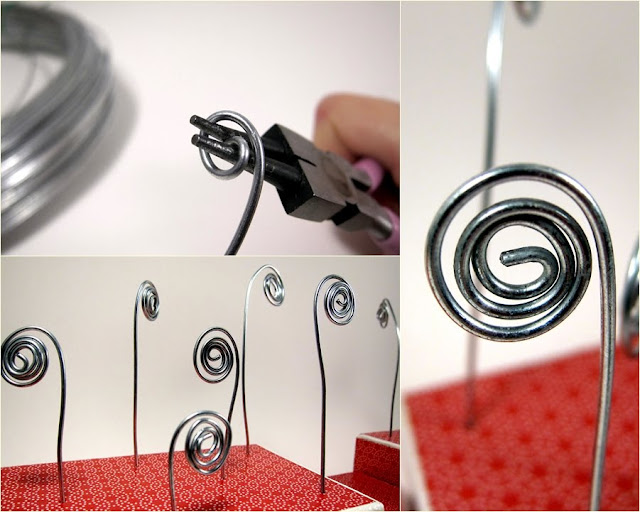 At last, it was time to experiment with the options.
How fun? 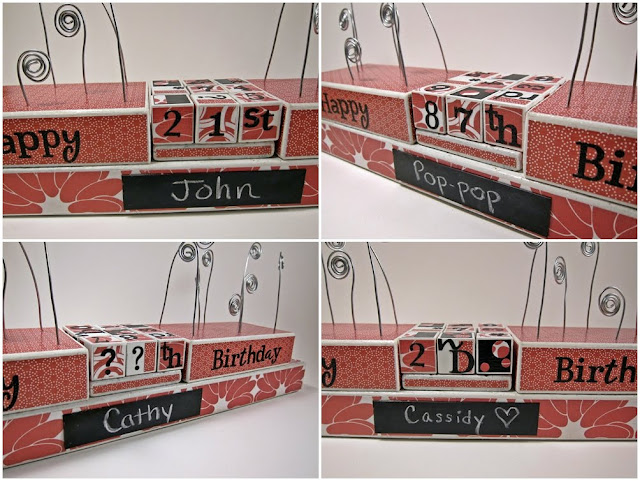 The beauty of the project is that the wire holders are removable, so it stores flat. (and a cute little matching box makes it easy to find everything). 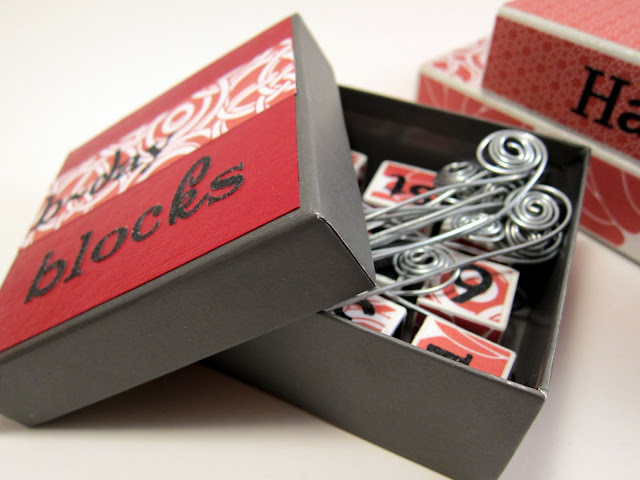 What would I have done differently?
First, I would not have painted the entire block. It was a waste of time. I maybe should have just painted the edges, or left them unfinished. (or paint / stain afterwards, like How Does She suggested).
Second, I would not have used sparkly stickers. What a mess.
Thirdly, I would have been more careful planning the numbers vs. letters on the blocks.
Finally, I would have used a piece of wood for the chalkboard  plaque from the beginning.
But, I do not regret all the precise cutting. Once I figured out the dimensions, it was like a little assembly line to cut out and adhere the paper. I do like the resulting crisp edges, too.
Can’t wait to use for our next birthday!
Check out some of the fun link parties I will be attending this week.