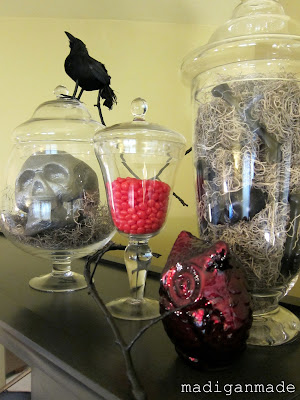 Are you sick of Halloween yet?
If you are, you will be happy to know this is my LAST Halloween project for the season.

And unfortunately, this project did not turn out the way I hoped it would. Let me explain…

Did you ever watch True Blood? Part of this display was inspired by that show.

{{spoiler alert}}
If you do not watch the show, all you need to know is that according to HBO, vampires turn into a pile of blood and goop after they are destroyed. (Not piles of stone and rubble like Stephenie Meyer would lead you to believe.)

In this past season, Russell (one of the ‘bad’ vampires) mourned the loss of Talbot (his vampire ‘son’) after he was killed. For several episodes, Russell carried around the bloody leftovers of Talbot in this cut crystal vase. He carried it everywhere. And talked to it. Clearly, he had a hard time letting go.   ﻿﻿

I thought it could be cool to turn one of my apothecary jars into a vase of vampire remains. But I did not really want to fill my jars with liquid or fake goop. Remember how I mentioned that red hots might be a good idea for Halloween decor?
Uh – huh….. that idea did not really pan out.
Red hots became my vase of vampire remains.  Not quite the effect I had hoped for!
Oh well! Do you have any great ideas to make a jar full of blood?

(I just wrote that sentence and realized how morbid that sounds! Yikes!) 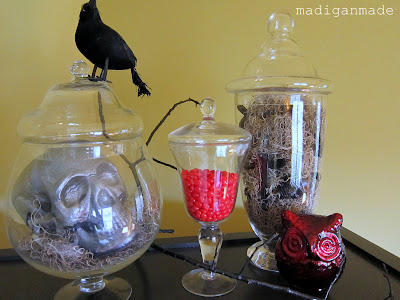 If you were interested in the rest of this vignette,
I filled the tall vase with spray painted dollar store skeletons and a little moss. 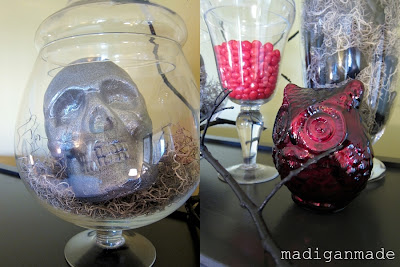 And I a spray painted a big skull from a craft store. I used black spray paint then a layer of spray glitter.
(Did you ever use spray glitter? It is a little pricier than a jar of glitter and glue. But the price was worth it. I did not have a huge mess and glitter shedding everywhere.)

A stick (spray painted black), a little crow and a glass owl finish the the top of my ‘library cabinet’.
(These work with the rest of my black, white and red Halloween decor.)
I promise, no more Halloween projects! This was my least favorite, mainly because the red hots killed the vibe.
Hopefully, I will have better ideas for the jars next year.

Content Copyright:2010-14. Madigan Made.
« A motorcycle-inspired Halloween wreath
The best potato soup ever. »