Madigan made… ‘deep’ thoughts about pink and a cute vase. 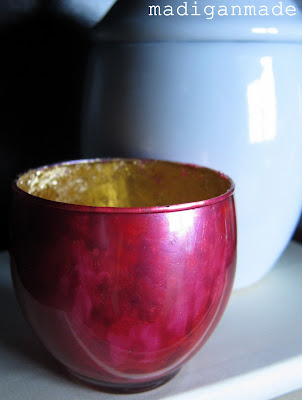 Did you know that Pantone labeled “Honeysuckle” as the color of the year for 2011? 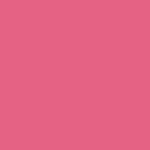 When I first heard about this color, I was unsure what to think about it. Normally, I am not a “pink” girl.

Pink can be a dainty color. Pink reminds me of Barbie and Dolores Umbridge from Harry Potter. I don’t drive a pink Jeep and wear miniskirts… and I don’t sip tea in an office plastered with cat pictures.

But after re-styling the bookcase in my den, I realized that I do like pink. Honeysuckle is a pretty pink. But I prefer an even deeper, dark raspberry pink.  The pink I like is bold. It is not dainty.

Look at my grandma’s china and the botanicals I have next to my bookcase. They both have a deep, dark pink in them. 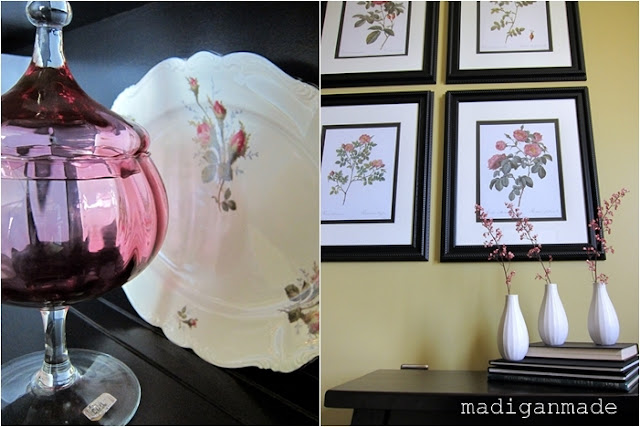 As I was putting together that bookcase, I concluded that I needed another small pink accessory for the shelving. 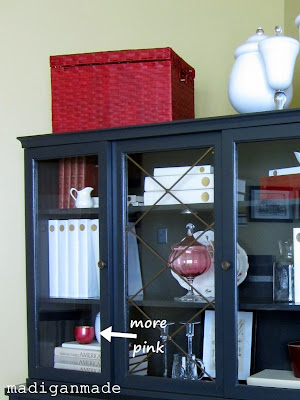 I could not find anything that perfect shade of dark pink… so {surprise, surprise} I decided to make something. 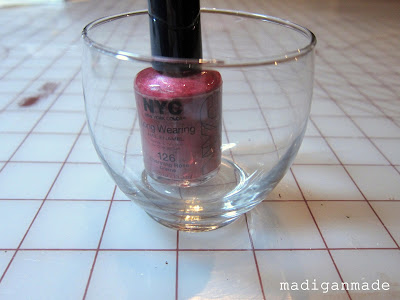 I grabbed a little vase from the dollar store… and a 99 cent bottle of nail polish.

I recently made my milkglass apothecary jars, so I was inspired to paint the inside of the glass again.
I could have used pink craft paint, but I thought the nail polish would add a little depth and metallic sheen. 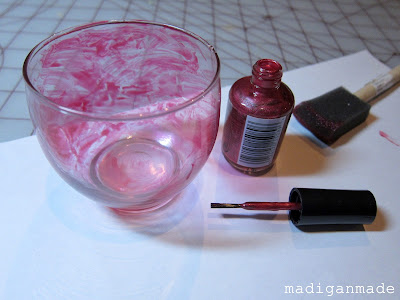 This is after one coat. I loved how the nail polish had a shimmer. I painted a few more coats.

There were still a few thin spots. So then I thought adding a few other shade of pink and reds could add even more dimension. I raided my nail polish stash and randomly added a few spots of each color on the glass. 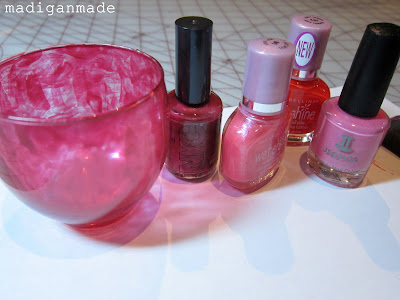 But after I did that, the inside of the vase looked kind of messy and it needed ‘something‘ to line the interior.
Some elements on the bookcase had touches of gold. So, I used some leftover gold leaf I had from another project. 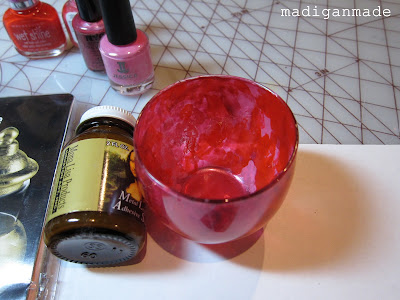 I just followed the instructions from the manufacturer for the leaf. I painted the inside of the vase with adhesive solution. I allowed that to dry for about an hour and become tacky. Then I just carefully took pieces of gold leaf and put them in the vase interior and gently smoothed the gold leaf out with a brush. I did my best to cover the inside of the vase.
I love it. It is the perfect little pop of (dark) pink in the corner of the shelving. 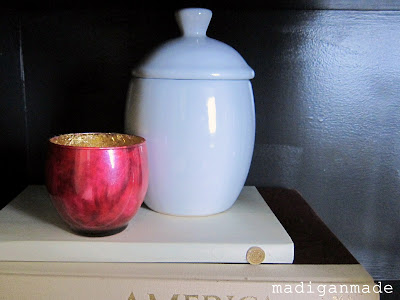 What about you? Have you embraced any pink this year? 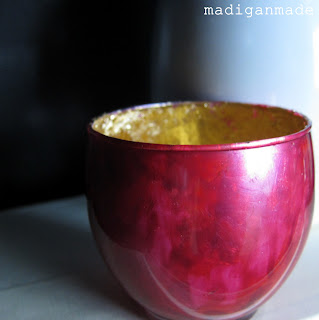 By the way: This little vase easily cost less than $5 to make, so am I adding it to the CSI Project’s Under $5 party this week.
(Since I clearly missed their “Honeysuckle” party already. Darn.)

($1 vase + $0.99 nail polish + free nail polish from my stash + leftover gold leaf that could not be more that a dollar’s worth = under five dollars!)

Content Copyright:2010-14. Madigan Made.
« Guess who is over at the CSI Project today?
Guest Project: Tuna can pincushion »