Madigan made… a slip cover for a futon couch.

Are you easily intimidated by the scope of a big project? Well, I’m slowly trying to finish decorating my office area… and one of the major projects I needed to tackle scared me. I wanted to make a slipcover for the futon couch.

Yes… I said slip. cover. Sounds a little intimidating, doesn’t it? I’ve been putting this project off for awhile, but I finally bit the bullet and attempted it. I’m not going to lie to you and tell you that a slipcover is easy… but I’m here to say that it is do-able.

Keep in mind that everything I know about slipcovers comes from the old TV show Trading Spaces… well, almost everything. Most of the construction tips I remember were from the (often) controversial designer Hildi Santo-Tomas. Yes, she wasn’t afraid to put crazy stuff on the walls… but Hildi also could whip up a couch slipcover in no time!   I remember that she’d place the fabric pieces good side ‘down’ onto a sofa, pin it snugly and sew around those edges. When the cover was flipped right-side out, it fit over the couch. I’m sure there was more to it… but that is the general approach I used with my futon cover.

Here is what the futon looked like before I started. A little dull and sad… like the college leftover that it was… 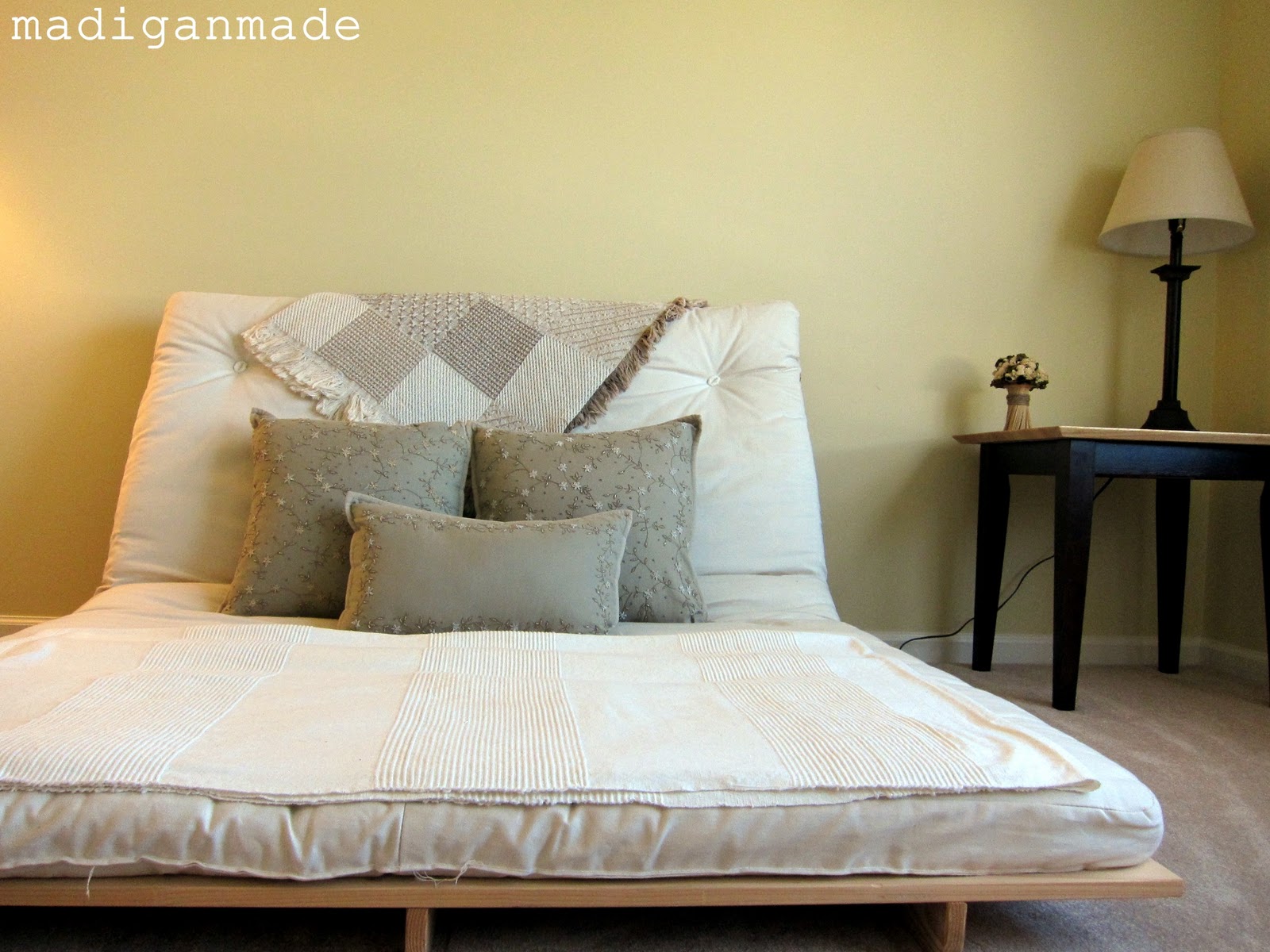 My slipcover was pretty easy to figure out because the futon couch was boxy and it had a simple shape. It was a good project for me to attempt for my first cover. Keep in mind as you read below that I am a novice sewer.

My tips for creating your own simple slipcover:

I think I mentioned this already,  but I repeat… I’m not an expert. However, if I can do this… so can you!

How to Sew a Futon Cover:

First, I cut the six yards of fabric in half. I washed and dried each 3 yard piece of cotton.

Sew the bottom half of the futon cover:

I laid down one of the fabric pieces lengthwise over the bottom seat of the couch with the ‘good’ side facing down (though, there really isn’t a difference with cotton duck). Some of the fabric extended ‘up’ the back of the couch (more on that later). I pinched and pinned the fabric around the front two corners of the seat and marked a general line for stitching. I sewed those lines and flipped the fabric around to see if the fit was snug (but not too snug). I pinned and sewed a little more to adjust the fit, if needed. Then, I trimmed the extra fabric near the seams to allow about a half-inch seam allowance.

Next, I fit the fabric right-side up on the couch seat. I used a straight edge (ruler) to draw a line where the fabric met the floor between the two corner seams along the front of the couch. Then, I pressed along that line and  sewed a hem that followed that edge.

I repeated this process along the sides of the couch and sewed hems that extended to the back edge of the seat on each side.

Fit the sides and secure the backs with tabs.

The last area that needed to be addressed was the back sides of the bottom piece. From the two hems along the sides and back, I gathered and folded the fabric. I pinned the fabric in place and sewed those lines to form a large “tab” in the back on both sides. I attached the top of a snap to the fabric tab and then used screws to attach the bottom of the snaps to the wood slats of the futon. The snaps were a way to secure the bottom of the futon cover to the wood frame.

Sew the top half of the slipcover:

Like I did on the bottom section, I pinched and fit the fabric around top of the futon corners on the back of the couch. Again, I pinned the corners, sketched lines and sewed.

Sew the side seams.

After I sewed the corners, I pinned the back of the fabric to the front so that the back selvage edge aligned with the front hemmed edge. I sewed a seam following those pins. This area took a little readjusting (a.k.a. seam ripper!) at times to get the fit right.

Then, I trimmed the fabric down to create 1/2 inch seam allowances. I flipped the futon cover right side out and fit it back over the couch.

In the back of the futon, there was some loose fabric hanging from the top section. I pulled and folded over the extra fabric and used a set of snaps to pull the fabric together. This created a tighter ‘fit’ for the top section but allowed the section to be removed when needed.

I trimmed all the loose thread, ironed the whole slipcover and use a little water to remove the pen lines and markings from the edges.

When I placed the bottom cover and the top cover back on the futon it looked sooo much better than before!

The futon no longer looks like a college dorm cast-off… it looks like a simple, armless, white loveseat. You can see the side of the futon here and how the fit of the fabric is fairly snug. I think the snaps in the back helped.

I love how the white couch looks with my lattice and paisley orange, blue and green pillows. I’m hoping this will be a cozy place to sit and write.

And you may notice that there is an empty, blank wall above the futon. That space needs some artwork, don’t you think?  Wall décor is next on my list and it is not nearly as intimidating as this project. I hope to show you more about the wall art soon!